Signing up to me too

Signing up to me too

Much has been written about commentator Jane Caro’s federal election-night social media post.

Caro tweeted less-than-flattering comments about the country in which she lives, and went on “… but I am at the best, most brilliant and cool wedding I have ever been too”.

To my knowledge, none of the commentary around her election-night rant picked up on the grammatical clanger.

Caro is also co-author with Chris Bonnor of The Stupid Country: How Australia is Dismantling Public Education, but as far as I know she hasn’t made any attempt to acknowledge her adverbial abuse.

So annoyed was she at fellow Australians who voted contrary to her wishes, she also said she wished she was a New Zealander.

The land of the long white cloud is famous for many things, including thoroughbreds. And as we all probably remember:

One-One was a racehorse, Two-Two was one too.

One-One won one race, Two-Two won one too. 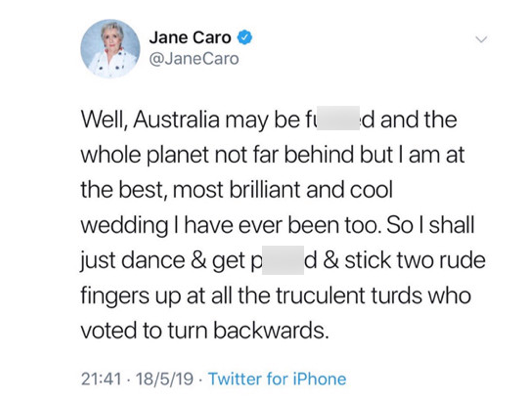