Rockumentary is a roll call of great songs, from Dylan to Nick Cave

Rockumentary is a roll call of great songs, from Dylan to Nick Cave

A dynamic music stage show alludes to angry old men, but it is really a touching new tribute, because at one time the subjects were sensitive young songwriters.

Writer and producer Chris Keeble (who has previously produced Pearl – The Janis Joplin Story), along with musical director Jeremy Edwards, have created a full-on two-hour “rockumentary” that delivers not only a catalogue of great songs, but interesting stories to go with them.

The show spans over 70 years of music history.

“I’m also a huge Bob Dylan fan and managed to get some work as a stagehand when he toured with Tom Petty and the Heartbreakers in 1986.

“Dylan is the obvious one, but all the performers referenced in The Songs and Tales of Angry Old Men are poets.

“I love the songs they wrote, the way they performed them and the stories of the songs. The show is interactive too, so you get great songs, a hot band, and amazing imagery.”

The title sounds like some BBC reality TV program with B-list Pommy celebs moaning about modern life. But this is an emotive piece of theatre bringing to life the troubadours, and in many cases the shapers, of the rock era.

Apart from Dylan and Willie Nelson, the angry old men of the title include many of the living, including Bob Seger, Kris Kristofferson, Jackson Browne, Tom Waits, Neil Young, Van Morrison, Nick Cave and John Mellencamp.

The show’s website pays tribute to “those we have lost”, an impressive array of songwriters and performers: Tom Petty, Leon Russell, Leonard Cohen, Joe Cocker, Lou Reed and Johnny Cash.

Great songs from great songwriters are interwoven with tales revealing surprising and unknown stories behind the music.

Superbly crafted songs not only define the era in which they were composed, but are timeless.

About the words: Vocalist Matt Ross in the Angry Old Men show.

Many in Gen Y know the richness of these songs and the current crop of “vintage hipsters” is just discovering them. Talking ’bout my generation … I was so much older then, I’m younger than that now.

Together they not only show respect for some of the greatest singer-songwriters of any era, but they bring to life the powerful storytelling, narrative, and lyrical richness of these balladeers.

The two-part show provides an outline of the background of the struggling young performers before they became angry old men. The audience is treated to tales of their influences, character traits and settings of the songs.

The crowd can relive the historic festivals and recording dates, the connections between the players, when they collaborated, when they feuded.

And find out about the egos, the flops and the rebirths. And realising some of them performed into their eighth decade.

Visual projections, animations, photos, and quotes honouring the work of these artistic titans complement the artistry of these great songs.

Nothing wrong with reopening your back pages.

The Songs and Tales of Angry Old Men – featuring Dylan, Cohen, Waits, Cash, Young and many more. Saturday,  May 5, Lizotte’s (show only $44).

“I love the songs they wrote, the way they performed them and the stories of the songs. The show is interactive too, so you get great songs, a hot band, and amazing imagery.”
Producer Chris Keeble 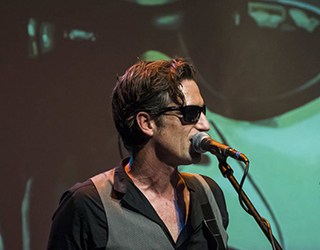