The Commonwealth Bank Board announced on August 8 it would strip the short-term bonuses to be paid to senior executives, and cut fees paid to directors by a fifth, as it battled the fallout from allegations it had breached money-laundering and terrorist-financing laws more than 50,000 times.

Also on August 8, NSW Premier Gladys Berejiklian announced the state government would seek to change the law to give it the power to send in police to dismantle a homeless camp in Martin Place. It followed a long-running stoush with the City of Sydney.

The language of key players in the stories is worth a look.

CBA chairman Catherine Livingstone said the board considered “risk and reputation” when deciding to scrap the bonuses.

“… the overriding consideration of the board was the collective accountability of senior management for the overall reputation of the group,” she said.

Taking one for the team is implied, but does it pass the pub test? Surely bonuses should only be paid for achievement. They are not an entitlement to be taken away as a form of punishment.

The Australian Transaction Reports and Analysis Centre alleges CBA failed to provide on-time reports of 53,506 cash transactions of $10,000 or more and totalling $625m. The original estimated fine for the alleged breaches, if proven, was $1 trillion, but this has been downgraded.

Know your audience is a communication bedrock, so we should remember Ms Livingstone’s target. Whatever the cumulative figure of the scrapped bonuses, it will surely be dwarfed by the amount shareholders will have to stump up if the bank is fined.

The alleged laundered money would buy a lot of shelter and resources for the homeless.

“It’s not illegal for people to be homeless — for some people it’s a virtually inevitable consequence of the housing affordability crisis in our city,” said Sydney Lord Mayor Clover Moore.

Premier Berejiklian countered by saying “the City of Sydney had the power to deal with [the tent city] issue …but chose not to”.

Ms Livingstone also said Mr Narev had the “full confidence” of the board. It has since been confirmed he will retire by July next year.

Caught in the middle of a bigger issue, the bonusless and the homeless “move on”. That’s a language we all understand. 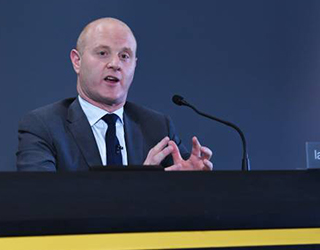