Opinion | It’s time for a spell

Opinion | It’s time for a spell

“The Walkley Awards for Excellence in Journalism are presented annually in Australia to recognise and reward excellence in the craft. Finalists are selected by eminent journalists and photographers and overall winners judges (sic) by the Walkley Advisory Board.”

That is a direct quote from The Walkley Foundation website and includes a “typo” (“judges” should be “judged”). And you would assume “awards for excellence” would “reward excellence”.

The list of general criteria for assessing entries includes “balance, accuracy and ethics”, and “excellence in written communication and/or technical and production skill”.

“Accuracy” in this sense unfortunately only refers to the accuracy of events relayed, not accuracy at the nuts and bolts level, “checking every checkable fact”, as my former editor used to say. No ethics when it comes to the contribution of sub-editors. “Excellence in written communication and/or technical and production skill” should also give a nod to basic writing, but again, unfortunately it is not the case.

Why “unfortunately”, and how do I know? I still work in the industry and the general standard of writing and spelling is appalling.

At this year’s “awards for excellence in journalism” in Brisbane, the screen flashed “In Memorium” (sic) rather than “In Memoriam”. My good mate and former golfing partner The Australian’s late music writer, Iain Shedden, who died a month ago, was misspelt as Iain “Sheddon”. Advisory board member, Guardian Australia editor-in-chief ­Lenore Taylor, was captioned as working for The Daily Telegraph.

My 2017 award goes to “ofay”. Have a think about it. It threw me until I turned from the screen and repeated the sentence aloud. The young writer meant “au fait”. Fountain pen natives would have struggled, but “ofay” in 2017 comes with a squiggly red line under it, meaning it’s probably wrong, and certainly worth checking.

The annoying thing about spelling errors in this day and age is that checking mechanisms are readily available, in many cases automatic. Digital natives have it easy when it comes to uncovering potential spelling or grammatical problems.

At least my generation had an excuse. Checking involved looking at a dictionary. But if you didn’t have a rough idea of how a word “looked”, it was hard work. “Au fait starts with an ‘a’ you say? I’m not au fait with French.”

Good writing is good editing and the only way to achieve excellence in journalism, or indeed any communication, is to continually reread, check and use all technology available.

In this digital age it’s possible to research anything easily and quickly. Celebrity gardener Don Burke recently self-diagnosed Asperger’s syndrome to explain vile behaviour. A day or so later reports surfaced that Adelaide Archbishop Philip Wilson had been given a “working diagnosis” of Alzheimer’s disease only two weeks before he was due to face a landmark trial in Newcastle for failing to report child sexual abuse allegations to police.

I hope you’re “ofay” with this. Merry Christmas and have a great spell. 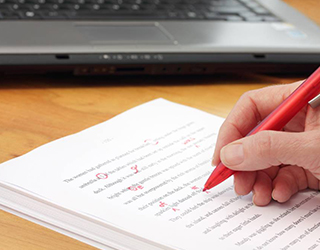