Early I know, but this is my last effort for the year. Yuletide is an appropriate period for a column devoted to business writing.

It’s the one time of the year when there is a flurry of writing, or more correctly, penmanship.

Yep, modified cursive is dusted off for Chrissie cards and we search for the right words before reverting to cliché.

I’m not big on year-in-review stories but a look back over these columns would reveal a theme of the importance of handwriting. Science says it kicks the creative juices into action. Educators say it is still an important tool.

Yet time marches on.

Strange to think then that within 100 years very few people will be able to read the cursive handwriting most Australian schoolkids mastered in bygone centuries. Handwriting experts and/or computer software will decipher it.

Many argue of course it is no loss. The writing was on the wall so to speak. And for many it’s the message, not the means.

Trump used direct and repetitious language as well as nostalgic rhetoric. The “concrete” language allowed Americans to visualise what he was saying. Think for example “Lock her up” (Hillary Clinton), “Build that wall” (immigration) and “Drain the swamp”(Washington elites). An imperative verb and the power of three. It worked a treat with disaffected Americans.

Think about that next time you write a list with bullet points.

Trump’s nostalgia kick revolved around “Make America Great Again” and “Not for sale”. Nostalgia bias dictates that people generally look at the past in a more positive light than the reality they experienced. Graves uses the analogy of the success of school reunions.

There were many aspects to the US election result, not the least actually convincing people to vote. And the primary concern of this column is communication, but Graves’ wider observation is apposite: “What is known by all great writers is that if you use abstract jargon language, it makes it very difficult to picture what you are writing about.”

Worth noting when you get the Chrissie cards out. And when you dust off the pen, think of the joy of receiving a handwritten letter.

Note to family: The History and Uncertain Future of Handwriting by Anne Trubek was released last month. 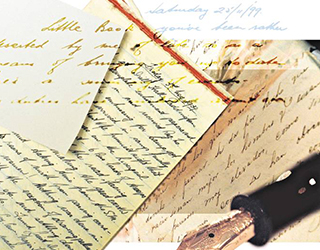