It should at least be interesting. And something should tell recipients they’re in for something good.

The kiss analogy can be extended to the nuts and bolts of writing.

In this case, when used as an acronym. Sports coaches have been preaching the KISS mantra for a while now. Keep It Simple Stupid. It not only addresses their protégés directly, but in many cases correctly.

Senior newspaper editors have been conveying the same advice to journalists for more than a century. And in far more colourful language than most sports coaches.

It happens after the first piece of waffle is submitted, or the first time each sentence of a story hasn’t been edited to its essence.

Thereafter every reporter and sub-editor has it indelibly stamped in his or her reference manual.

The principles apply directly to business writing and short can substitute for simple. Keep It Short Stupid.

Most people tend to overwrite.

There are two problems.

The first relates to verbosity. It is usually an attempt to convey intelligence or scholarship.

The writer wants to show they are ‘‘all over’’ the topic.

Unfortunately it can backfire. Either the reader is turned off, which is the worst possible result for any piece of communication.

Or the reader may want to follow up this show of erudition and ask some deeper questions relating to the topic. If the writing was merely obfuscation, that spells trouble.

If you want readers to comprehend your writing, keep it short. Legalese is probably the worst offender although position descriptions and political rhetoric would make the semi-finals of overwriting. George Orwell once noted: ‘‘Political language is designed to make lies sound truthful and murder respectable, and to give an appearance of solidity to pure wind.’’ In today’s business world a lot of communication is read on a small screen. Keep it short. The second problem is people tend to write as they speak.

Trying to be clever through overwriting, or writing as you speak, are killers in business.

Here is an example I use in Write For Impact workshops. ‘‘Taking everything into consideration, there are myriad opportunities if we go down the path of removing the tissue forming the outer covering of the vertebrate body of the moggy.’’ It is a convoluted way of saying: ‘‘There is more than one way to skin a cat.’’ Great. So do we just use the proverb?

‘‘There are options.’’ Too often people write to impress rather than to inform.

In the 14th century, Chaucer implored clerics not to communicate in the ‘‘heigh style’’, but to ‘‘Speketh so pleyn at this time, I yow preye, that we may understone what ye seye’’. That says it all really. But you can also pucker up to those modern prose stylists Hall & Oates to help with your business communications.

Or, if you follow the Chinese horoscope, 2015 is the Year of the Sheep … short, helpful, engaging, empathetic points.

Darrell Croker is senior coach at Write For Impact.  writeforimpact.com.au 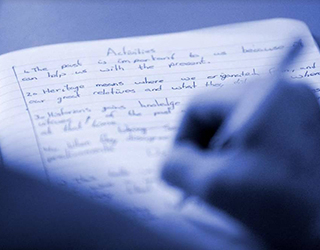