For want of better knowledge

For want of better knowledge

We are still coming to terms with the federal election result, but one reason cited for Mr Turnbull’s less-than-overwhelming win was his championing of the digital age. He failed to invite “old economy” workers on his journey, the argument goes, and the vox populi shouted “don’t leave us behind”. Proof he is living in a disrupted world.

The young Malcolm was educated at Sydney Grammar School, which still teaches Latin.

It’s interesting to consider then what one its most famous alumni thinks of the school’s ban on laptops in class. The soon-to-retire headmaster of Sydney Grammar, John Vallance, has said the Rudd-Gillard government’s $2.4 billion Digital Education Revolution, which used taxpayer funds to buy laptops for high school students, was money wasted.

“It didn’t really do anything except enrich Microsoft and Hewlett-Packard and Apple,’’ Dr Valance said.

Just to provide a further twist, another famous Sydney Grammar old boy is David Gonski, the architect of the needs-based funding model for schools, and whose name is now immortalised from Teacher Federation advertising asking us to give one. He recommended pumping a lot more money into public education  … presumably to buy laptops.

Yet Dr Vallance has described the billions of dollars spent on computers in Australian schools over the past seven years as a “scandalous waste of money’’.

“We see teaching as fundamentally a social activity,’’ he said. “It’s about interaction between people, about discussion, about conversation … laptops or iPads in the classroom inhibit conversation.”

Sydney Grammar has been studying the difference between handwritten and computer-typed tasks among boys in year 3 and year 5.

“In creative writing tasks, they find it much easier to write by hand, to put their ideas down on a piece of paper, than they do with a keyboard,’’ Dr Vallance said.

The Australian Curriculum, Assessment and Reporting Authority plans to computerise the National Assessment Program – Literacy and Numeracy tests next year. It means a generation of students doing NAPLAN won’t have the capacity to write longhand to express themselves. This, despite an OECD report last year questioning the growing reliance on technology in schools and saying students must be given a solid foundation in reading, writing and maths before being introduced to computers.

Yet another famous Sydney Grammar alumni is Andrew Barton Paterson. It’s doubtful a keyboard would have improved Banjo’s writing, at least his poetry anyway. But a laptop might have made life easier in his years as a war correspondent.

That’s the nub. Technology is a servant, not a master. Even the recipient of the letter for Clancy could reply, if only with “a thumb-nail dipped in tar”. 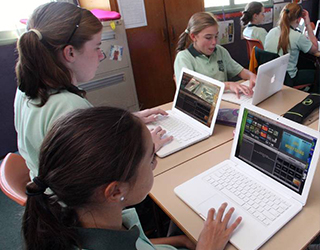