As my Irish friends are fond of saying since the incident a few years ago, “Laysus”.

I refer to the Vatican recalling more than 6000 papal medallions because the name Jesus was misspelt. The medals were minted to commemorate the election of Pope Francis, with the Latin spelling of Jesus (Jesvs) printed incorrectly with an “L” in the place of the “J”.

As the first Jesuit pope it was a shame for Frank because the order has a fine record when it comes to education. The phrase containing the incorrect spelling was chosen by Pope Francis himself.

“Jesus, therefore, saw the publican, and because he saw by having mercy and by choosing, He said to him, ‘Follow me'”.

The medallions still in circulation are valuable collectors’ items. But not all spelling mistakes end up profitable. In fact, they can be costly.

The incident with the “L-platers” at the Italian State Mint occurred in October 2013, just as Global Lingo was polling 1029 UK adults on their online purchasing and browsing habits.

That survey has grown a life of its own and prompted similar polls in other countries that have thrown up similar results.

Websites have about six seconds to grab a reader’s attention.

The spelling should be in mint condition.

Darrell Croker is senior coach at Write For Impact.
darrell.croker@writeforimpact.com.au 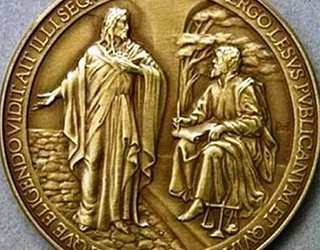